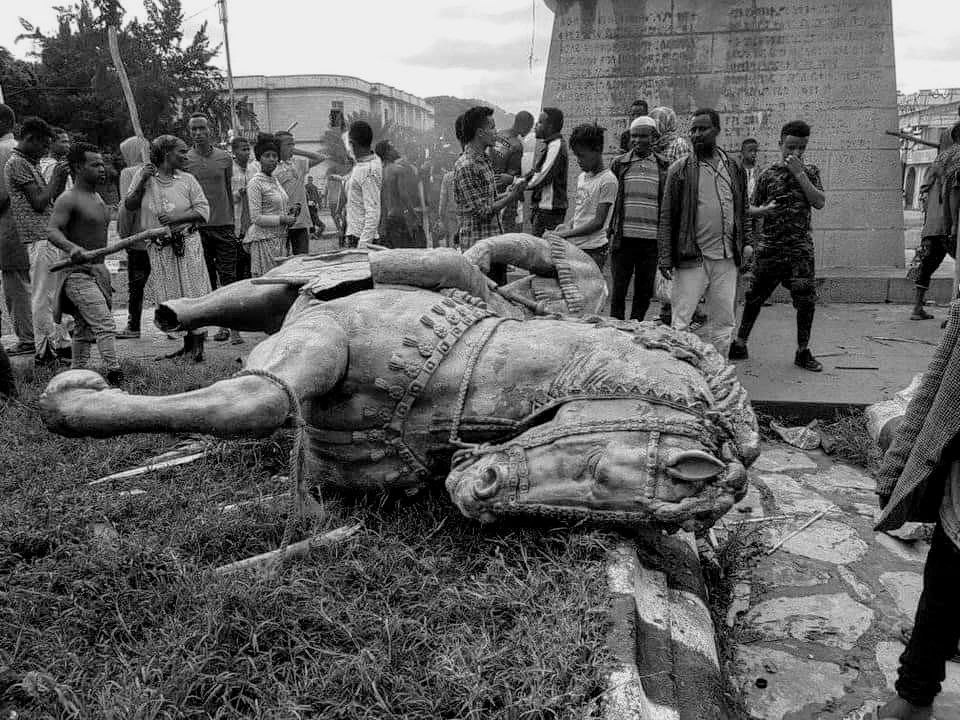 A toppled statue of Ras Makonnen, the distant cousin of Emperor Menilik. His statue was toppled following the assassination of Artist Hachalu Hundessa on June, 2020.

The victory at Adwa is taken for victory over European colonialism and imperialism. That a black African force had defeated a white European army at Adwa in 1896 is beyond doubt. But, the representation of Adwa as an anti-colonial war and the victory as African victory over colonialism is an atrocious distortion. Menelik relinquished the role he was playing as an Italian proxy at the battle of Adwa and became a member of the colonialist club in his own right. Colonialism lost color there and then. One can be white, brown or black, and own a colony if one can fight for it. The European mass media of the time reported that fact. The Spectator of 27 February 1897, for example, reflected the British view of the matter stating that, although Menelik, his queen, and his generals care little for human life, “this native dynasty of dark men,” nominally Christian, is “orderly enough to be received into intercourse with Europe.” The European colonial powers recognized ‘the dynasty of dark men’ as their junior partner in the scramble for colonies.

Back from Adwa, Menelik continued his competition with the British for territories in the south and southwest. It is interesting to note here that now he, not only got rid of the status of proxy in the white men’s competition for colonies in Africa, but he could even employ white men as his proxy in the expansion of his colonial domains. Thus, in a letter he wrote on the 7th of June 1897, he told the Russian adventurer Count Leontiev “… by this letter, I inform you that it is my wish to appoint you forever over the land on the limit of which you open. So as to pay for your losses, we will give you as much as five years gratis; but after that, if in the land you have opened be found any gold, silver, ivory or coffee … so shall you pay your tribute. This land on the limit that I give will be on the south side of Ethiopia” (cited in Greenfield and Hassan, “Interpretation of Oromo Nationality,” Horn of Africa, Vol. 3(3), 1981). Count Leontiev and his men became Menelik’s proxy, albeit their investment in the conquest of the Baro River valley in the southwest, did bring them much profit. Thus, Menelik could compete with Europeans in the business of empire-building in the continent, particularly after his victory over the Italians at the battle of Adwa.

“Adwa as  an African victory over colonialism is  an atrocious distortion.”

The whole story about the battle of Adwa is not written yet. The circumstances, under which the peoples of the south, such as the Oromo, who were conquered in the 1880s, and the Walaita, who were conquered by Menelik two years before the battle of Adwa, participated in the war are not mentioned. Did they march north to fight against Italian colonialism voluntarily? What had happened to them after the war is never raised in the story. Were they rewarded for their contributions in the victory over the Italians? I will not delve into details, but the answer to both questions is ‘NO’! They were captives who were forced to march north and become cannon-fodder. The “reward” for their participation was the confiscation of land and slavery, which characterized Abyssinian colonialism. Thus, the Oromos and the Walaita, who participated in the battle of Adwa, did not win any victory over colonialism for themselves. They helped a black colonialist power in the scramble for colonies with white colonialists. They were the target and victims of the competition which Menelik won. That is why I call the simplification of Menelik’s engagement in the battle of Adwa as an anti-colonial drive, and his victory as African victory over colonialism an atrocious distortion. Simply, it is not true.

The war was between two colonizing powers over colonies in the Horn of Africa, the Italians and the Abyssinians, whose leader Menelik, as mentioned above, was, ironically, armed and entered the race for colonies as a proxy of the former. That the distortion is sold by the Abyssinians to the rest of the world should not mean the Oromo people should accept the colonial situation as a historical accident and call ourselves Ethiopians. The fact that Menelik had outsmarted the Italians, or that the rest of Africa has taken pride in the victory at Adwa as their victory over colonialism and racism, should not mean we should repress or forget the memories of the genocides committed against the conquered peoples, such as Oromo, the Kaficho and Gimira. Since I have dealt with the subject at length in, “Genocidal Violence in the Making of Nation and State in Ethiopia” (African Sociological Review Vol. 9(2), 2005), I will not go into that here. It suffices to note that, as participants in the scramble for colonies, the crimes against humanity, which the Abyssinian had committed, does not weigh less, if not more, than the crimes committed by the Belgians in the Congo and by the Germans in Namibia. In short, what the victory at Adwa led to was the recognition of Abyssinia as “a legitimate colonial power,” to use Norgberg’s articulation, and not the protection of Africans against colonial genocide. Both Britain and France negotiated and signed agreements that delineated colonial borders with Abyssinia.

Although the colonial makeup of the Ethiopian empire was proved beyond doubt, there are politicians who think that it is possible to deprive the Oromo and the other conquered peoples of the right to self-determination by keeping on denying the fact. They believe their obstinate denial of Ethiopian colonialism will render the Oromo demand for an independent state meaningless. They will reduce the Oromo national demand for freedom to what they call the “demand of a few power-hungry Oromo elites” – ignoring the experience and grievances of the Oromo and other colonized peoples at large. However, this did not give the expected result of weakening Oromo feeling about their national identity or their claim to national sovereignty.

Since the Oromo opinion and experience of the Ethiopian conquest is well covered in oral traditions, in songs, travelers’ notes, and in numerous other documents, I will not go into details. Here, it suffices to note that, for the vast majority of the Oromo people, Ethiopia is, not only a colonial construction built through conquest, but that it is also being experienced as such. The Amhara have a saying: yewaggaa biresa, yeteweggaa ayrasaam (“he, who inflicts harms, may forget; but he, who is hurt, never will.”) The saying applies to the Oromo, who share collective memories, which were passed down from past generations which had experienced the conquest.

In addition, the memories of conquest are being reinforced by the atrocities of the present regime. Oromia is still a killing field for forces of the Ethiopian regime. Thousands of Oromos are still being killed every year by Ethiopian security forces of the present regime. This is no news. Oromo property rights are not respected. It suffices to mention here that millions of Oromos are displaced from their farm and pasturelands – which are then leased or sold to local and foreign contractors by the present regime. Although their ancestors were dispossessed of their land at the end of the nineteenth-century, that did not lead to their displacement from their homes and communities; they stayed as gabbars (serfs) of the landlords who owned their lands. They stayed at home. Those whose land is being confiscated today are uprooted and displaced. The loss they incurred is not only economic, but also social.

Colonialism has no color or nationality; therefore, English, French or Abyssinian colonialism is colonialism. The colonial makeup of the Ethiopian state is captured best by the Swiss conflict researcher Christian Scherrer of the Hiroshima Peace Institute, who noted that, ‘European and Abyssinian colonialism occurred simultaneously, pursued similar interests, albeit from differing socio-economic bases, and this was reinforced by comparable colonial ideologies of the idea of empire and notion of “civilizing mission” and the exploitation of the subjugated peoples.’ The Oromo quest for independence is informed by that history and more. Ethiopia was a colonial empire, not only in its origin but also in conduct. It is from this colonial structure and conduct that the Oromo people will free themselves.

To sum up, although Menelik had used Oromo resources to win the battle Adwa, he confiscated their land and enslaved the Oromo – even though Oromo farmers have been feeding the country while their families were made to starve; while their Oromo coffee and gold have been earning hard currency for the Ethiopia sate during the last 130 years, the Oromo have been sinking into abysmal poverty continuously; although Oromo athletes have, since Abebe Bikila won the first Ethiopian Olympic gold medal in Rome in 1960, been winning nearly all of the medals Ethiopia had earned at the Olympic Games and other international tournaments, Oromo identity has been denigrated and the people have been disrespected.

The question is, will it be surprising if the Oromo people feel that the Ethiopian state is as colonial and hostile to them as it was to their ancestors? Is it surprising that the perpetual atrocity, of which the violation of human rights against them by the present regime is a continuation, deepening the cleavage between the Oromo people and the Ethiopian state? Is it surprising if the Oromo feel that they are treated, not as respected citizens, but as denigrated subjects of the Ethiopian state and reject Ethiopian identity? Is it not human, and should not it be legitimate, to struggle for an independent Oromo state as the other African peoples who, rejecting the colonial identities imposed on them by Europeans, struggled and established their independent states during the last fifty years?

Mekuria Bulcha, Ph.D. and Professor of Sociology, is an author of widely read books and articles.