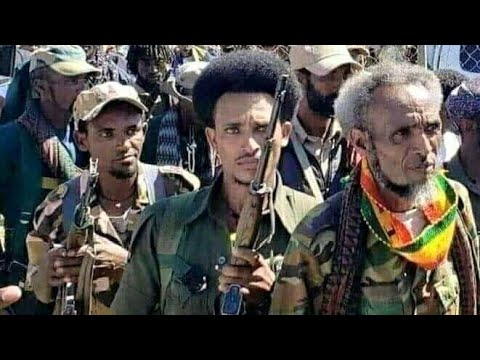 State-backed Amhara terror continues. This time, not in Metekel where the age-old, imperial quest of the Amhara for land and resources has resulted in communal violence, particularly driving the indigenous Gumuz to seek refuge in Sudan; or the countless cases of atrocities committed in Western Tigray, but in the Amhara region itself, ethnic Oromos were dragged out of an ambulance, beaten with sticks and rocks and repeatedly stabbed with what appears to be a knife.

The incident happened on March 20th, in Shewa Robit, Semien Shewa Zone of the Amhara Region.

“Stab him!” “Yes, that one, beat him,” says a man in the front guiding as to how the bloody spectacle should unfold.

Responding to his order, a man holding a knife keeps repeatedly stabbing at the dead bodies.

While the onlookers seemed to get a kick out of innocent civilians being bludgeoned to death, gunshots could be heard in the background.

Contrary to facts such as this on the ground, the head of the Amhara Association of America, Tewodros Tirfe,  appeared on Al Jazeera where he claimed the victims were actually ethnic Amharas who were “indiscriminately” shot at by “the Oromo Liberation Army” who “made it all the way to the Northern Shewa Zone of the Amhara region.”

So far, none of the perpetrators have been brought to justice and no governmental body has condemned this heinous crime committed by ethnic Amharas.

More from NewsMore posts in News »