By Awol Allo and Mohammed Ademo

Nuho Mohammed Gobana, a pioneering singer-songwriter and guitarist whose name is near synonymous with Tokkummaa (Oromo unity), died on Jan. 18, 2022, after a long illness.

Nuho’s lifetime preoccupation was Tokkummaa. His timeless classic, Tokkummaa, is akin to an Oromo national anthem and served as a powerful intergenerational call for a transcendent unity of purpose. Nuho embodied Oromummaa and lived a selfless life of service and struggle. He preached Tokkummaa at every opportunity, singing and speaking about the centrality of unity to the Oromo quest for freedom and emancipation.

Nuho Gobana was born in Laga Mixe, East Hararghe Zone, but grew up in Dire Dawa, where he moved with his family at five. Nuho had a natural inclination for singing and art at a young age. He started testing his vocals at Madrasa (Quran school) by adding lyrics and changing the rhythms to Manzuma (Islamic chants), for which he got in trouble with the teachers. Nuho began singing by mimicking Hindi, Harari, and Sudanese songs, which were abundant in Dire Dawa in his youth. He did not always understand the words of those songs, but the music spoke to his knack for the art.

Nuho’s encounter with discrimination against the Oromo during the Haile Selassie rule changed the trajectory of his life. Growing up in Dire Dawa, Nuho would occasionally skip school and spend the day at the court working as an interpreter in the 1960s. Dire Dawa was a city in a cultural and musical renaissance. Oromummaa was on the ascendance. The experience as an interpreter in the courts led Nuho to question the prevailing socio-political order of the day: who are the three panel of judges who spoke Amharic? Why didn’t they speak the language of the majority Oromo? Who are we [the Oromo]? Why are the Oromo treated differently? Nuho embarked on a transformative musical journey of self-knowledge and discovery to find answers to these profound political and ethical questions. He did not seek to exonerate himself from responsibility because “these things were simply set up that way” or because the deep-rooted oppression and systematic injustice he witnessed seemed inevitable and natural. He dedicated his life to raising awareness and awakening the consciousness of his people, becoming one of the most beloved household names in Oromia, widely admired for his distinct ability to articulate and amplify the Oromo experience through art and music. 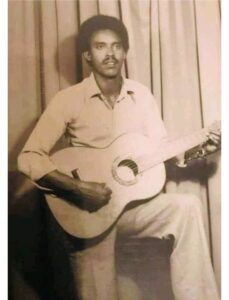 In the early 1960s, as a teen, he applied to join a newly formed Oromo music band: Biiftuu Ganamaa. At 14, he was too young and denied membership. He did not give up and signed on as a volunteer poet. He stayed up late at night writing lyrics and quickly earned his place in the band. “I used to write poems in Amharic and contribute to the band,” he told OPride in 2012.

In the early 1970s, Nuho learned about the efforts of Elemo Qilxu and his contemporaries to form the Oromo Liberation Front in Aden, Yemen, and how Oromo rebels downed warplanes in Bale. He decided to find a way to link up with one of the groups to learn about Oromo. Nuho wanted to travel to Bale and join the rebels but was too young to make the journey alone. His parents – Mohammed Gobana and Faxuma Adam – were worried that he would get in trouble and encouraged him to focus on his studies.

Among the most celebrated and recognized Oromo musicians of his generation, Nuho was a trailblazer of Oromo Music of resistance. His probing songs engage with complex political and ethical themes such as identity and recognition, unity and solidarity, nation and belonging, liberation and autonomy, home and exile, hope and suffering, and love and intimacy. Drawing on his experience as an Oromo and a Muslim in an Empire founded and sustained on the exclusion and denigration of his ethnic and religious identities, his songs offer biting socio-political commentary about what it means to be an Oromo in Ethiopia. “One day, I went to the city government to get a passport to travel abroad; they asked me to identify myself: what is your ethnicity?” Nuho recalled in the 2012 interview with Merga Yonas. “I did not know how to respond; if I said G*lla, I’d be an insult. If I said Qottu, it’d still be an insult. So, I wrote down Islam.”

In 1976, Nuho left for Yemen via Djibouti. In Djibouti, he learned that Elemo Qiltu and the freedom fighters he wanted to connect with had returned to Oromia in 1973 to challenge the Haile Selassie regime. Nuho stayed in Djibouti and decided to develop his budding interest in music. “I learned how to play the guitar in a month,” he recalled. “Art was already in me; In Djibouti, I recorded two albums.” Nuho never put down the guitar. He would forever be associated with the instrument, recording and producing hundreds of songs using an acoustic guitar.

Nuho grew up playing music with kids. His peers liked his raw voice and talent. He enjoyed singing for and impressing them with his hidden talent. He sang for Indian ex-pats in Dire Dawa, who gave him pocket change in return. Singing in Afaan Oromo was uncommon. He did not have access to any musical instruments. His only weapon was his voice.

Nuho’s seminal songs are healing and transformative, expanding our sensibilities and teaching us to pay attention not just to the large-scale system of oppression he witnessed in the courts as an interpreter but also to the everyday, the familiar, the emotional, and intimate aspects of our lives. Nuho has sung about every conceivable aspect of the Oromo life: the indignities of exile, the up and downs of Oromo struggle, Oromo flag song (anthem), his beloved Oromiya, a yearning for home and return, Finfinne, the Gulale of the early 1990s, love, family, marriage, cultural clashes among the Oromo diaspora in western countries (911), and his winding life journey (Yaa Galaana Jiru). Nuho wrote and produced an estimated 380 memorable songs or 38 albums by his own account.

The father of six never rested. He was a man on a mission, constantly moving around continents striving to unite the Oromo. Art was truly his weapon. He fought, as he did, with his fingers on the guitar. He sang what he believed. Nuho bends words into inspiring lyrics and often cries as he sings. As a storyteller, he educated and energized the young and the old. Among other places, Nuho lived and performed in Djibouti, Kenya, Saudi Arabia, Italy, Canada, the United States, and Germany. He won several awards for his performances at cultural shows in Djibouti, Italy, Canada, and the United States. Nuho had an extraordinary talent, but he was an ordinary man of the people. He was a good cook and enjoyed entertaining guests.

The beloved singer had an outsized contribution to the development of Oromo art and culture. He was the virtuoso of revolutionary songs with unrivaled contributions to the Oromo struggle. He was a dazzling entertainer and master storyteller whose charisma and presence filled the stage. His deep, roaring voice was engrossing and unmistakable. Nuho had a successful musical career that ran from the early 1970s to 2013 when he fell ill. However, the legendary singer never got his dues. His last decade of life was the most painful. He fell sick shortly after returning to Oromia in 2010. He fell off the radar and did not get proper early medical attention. His yearning to go home, live, and work among his people was thwarted by his deteriorating health. The Oromo, at home and in the diaspora, rallied around Nuho in the last decade, organizing several global fundraisers for his medical treatment. But Nuho never regained his roaring voice, strength, and towering presence.

“My desire and thirst to be with my people are not yet fulfilled,” he told Marga in 2012. He was hopeful and looked forward to producing more music and mentoring the new generation of Oromo musicians. Nuho was much encouraged by the resurgence of Oromo resistance music in recent years. After being partially paralyzed, frequent visits from younger prodigies such as Haacaaluu Hundessaa lifted his spirits. At every opportunity, in speech and gestures, Nuho had one request of the Oromo: Tokkummaa jabeessaa (strengthen your unity). During and in the immediate aftermath of the Oromo protests, Nuho saw his dream fulfilled and marveled at the state of the Oromo struggle.

Nuho’s songs laid the foundation for contemporary protest songs in Oromia, inspiring, exhorting, arousing, agitating fellow musicians and Oromos to do what is necessary to liberate Oromia from the dark depths of prejudice and secure the political emancipation of the Oromo.

His classic songs such as Tokkummaa and Yaa Rabbi are fulcrums for Oromo unity, becoming crucibles for constructing Oromo national identity itself. Isin Waamti Harmeen and Lallabanee or Nu Dirmadha are desperate calls for action, reproaching and exhorting Oromo intellectuals and personalities to return to Oromia and confront the injustice and systematic oppression facing its people. Alaabaa Oromiyaa provides a concise homily of the aims, purposes, and aspirations of the Oromo movement for self-determination. Dhufaan Jiraa is a soulful and nostalgic rendition of yearning for home and belonging. His Geerarsa is a robust and searing criticism of the dysfunction and failure of the Oromo leadership. He decried division and appealed to Oromummaa as a unifying creed: Shan, kudha shan, shantam taatanii, Gargar facaatanii, Bineensa beelaweef hiraata taatanii (five, fifteen, fifty, you allowed yourself to be divided as such and as a result became preys for the enemy.) In short, Nuho’s wide-ranging and engrossing songs are poetic sermons from which the Oromo struggle drew its sense of mission and identity, particularly in its early days.

Nuho Gobana dedicated his life to promoting the virtues of Tokkummaa and Oromummma. He leaves behind a momentous legacy that will inspire current and future generations.