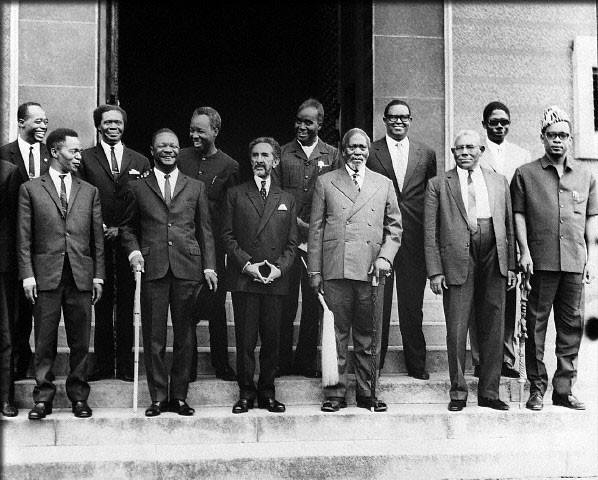 Some of the founding fathers of the Organisation of African Unity (OAU), Addis Ababa, 1963. Source: thisisafrica

The Oromo, like Africa, Needs to Distance itself from Colonial Heritage

The dangers of the colonial project in Africa in my opinion surpasses the simplicity of how we discuss and consume it. It dives well into how it was designed to safeguard colonial interests, interests that can only be guaranteed by creating colonial states that are filled with division, lack unifying factors, open to outside intervention and eventually doomed to fail. As we celebrate ‘Africa Day’, it is time for  African intellectuals, religious and political leaders to start discussing a project to rid Africa of its last colonial inheritance, the colonial state.

As the fever for independence across the continent wreaked havoc in European capitals after WWII, the former superpowers in what appeared to be a surrender to these demands gave in but intentionally ignored and sometimes intentionally empowered the forming of what I insist on describing as ‘colonial states’. These new entities would prove beneficial to former colonialists as coups and civil wars became the norm in these entities; that opened a backdoor for interest groups and new superpowers sometimes with collaboration with former ones to secure and enjoy the same privileges they enjoyed in the colonial era.

African leaders who carried the pan African flag were none the wiser to this plan. In fact, some founding fathers played a leading role in upholding this project; people like Ibrahim Aboud in Sudan, Yakubu Gowon in Nigeria and Jomo Kenyata in Kenya come as examples. All played a major role in suppressing nationalistic demands in favor of maintaining the colonial states they inherited.

Haile Selassie I in his speech at the same (OAU), a predecessor of the current African Union (AU), showcased the confusion of African leaders at the time. He stressed the importance of maintaining good relations with the colonialists while attacking every criterion of building a nation state. In his long address, at a time when he was faced with the Bale revolt and the student movement downplayed nationalistic demands describing it as ‘tribalism’; by doing that he refused to acknowledge that Africa is a continent of nations, and not tribes.

Ethiopia is no different in fact Ethiopia itself is a colonial project/state and was doomed to fail from its inception. In its case, multiple factors presented themselves, the biggest being the absence of components needed for the building of a nation state.

As a state, modern Ethiopia was built on two founding principles; maintenance of the supremacy of west friendly and dependent elite which happened to be representing two interweaving identities (the Christian and the Amhara) and the elimination of the other; the other constantly changing depending on which system of governance the elite adopted. Two successive regimes (The monarchy and Derg), tried tirelessly to create a nation state and a national identity by devising violent methods. These methods proved to be ineffective and saw the downfall of the two regimes.

The failure of the monarchy and Derg in silencing nationalistic demands prompted the political elite in the country for the first time since its inception to set aside their differences and discuss a way forward that can guarantee equal rights for all citizens and maintain the unity of the colonial project named Ethiopia. These discussions resulted in the introduction of the 1995 constitution that shaped Ethiopia into a federation of nations in the form of 9 national regional states (Sidama National Regional State became the 10th on Nov 2020) formed along ethnic and linguistic lines.

These newly formed entities were created for the purpose of guaranteed self-rule for individual nations within the federation and in the imaginations of many of the elite at the time, a federation of the willing like that of the Zanzibar-Tangankiya federation now known as Tanzania, itself showing signs of weakness and fracture and seeking refuge in the arms of a bigger east African confederation: The East African Community (EAC).

But soon after the formation of the federation, the elite of a constituent and founding nation (Tigrayans/Tegaru) of the empire, Tigray People’s Liberation Front (TPLF) hijacked the country’s newly introduced system, violated the constitutional order and drove the country to the edge of collapse. TPLF’s crackdown on the peoples of Gambella region, the Oromo and Somali nations, limiting of the space for both political discourse and freedom of expression and violation of basic human rights led to a popular uprising ignited and led mostly by the Oromo youth ‘Qeerroo’ and saw the downfall of TPLF led Ethiopian Peoples’ Democratic Revolutionary Front (EPDRF).

Ethiopia is now engaged in what is proving to be a prolonged civil war in Tigray and has again continued its historic crackdown on the south and especially the Oromo. Questions about nation-building and the nature of the state have taken the center stage of political discourse. Two old camps are in efforts to mobilize support for their dream projects, the unionist camp and the federalist camp.

The unionist camp, according to its critics, offers a unitary approach where One Language, One Identity is promoted, a project that proved fruitless in the past. In addition, this recent push by the camp towards a unitary project is sewing division and leading the country towards a dangerous path, where a repeated scenario of oppression of nations outside the dominant society could occur.

The federalist camp, on the other hand, promotes and pushes for a revised constitution and a more decentralized federal structure. This approach according to its critics, is the main factor behind communal and religious conflicts that are wreaking havoc across the country.

I won’t dive into the details of how this nation state can or should be built, I will leave that for a future article in which I will discuss in detail and present arguments to support my following statement: Until the Oromo is separated from the Ethiopian colonial state, its wellbeing can not be achieved.