What is Fano doing in Oromia?

Less than a month after a similar attack on ethnic Oromos in the Agamsa district, Horo Gudru zone of Oromia region claimed the lives of 100 civilians; more than 50 civilians were killed and thousands were displaced since September 22, 2022, in a fresh attack in Jarte Jardaga district of the same zone. Both residents in the area and the Oromo Liberation Army (OLA) blamed the attack on the heavily armed Amhara militia widely known as Fano.

Fano started as a protest movement that aligned itself with the Oromo protests in early 2017 but has since organized itself into an irregular armed militia. It has been implicated in atrocities in the ongoing Tigray war including, mass rape and ethnic cleansing and crimes against humanity. Through its leader Solomon Atanaw, the militia first declared new stated goals of returning what he described as “stolen Amhara lands.” These include Metekel in the Banishangul Gumuz region, North Shewa in the Oromia region, and Welkait (Western Tigray) and Raya in the Tigray region.

Under the guise of the international community, Amhara special forces and Fano militias successfully annexed Welkait into the Amhara region in the course of the Tigray war and Fano leaders have since stated intentions of returning more lands to Amhara possession.

Evidently, in March 2022, at a public event, a Fano leader said, “We did not go into someone else’s region by going to Wollega. We were in Wollega long before the Oromos settled there. We were in Debrezeyt [Bishoftu]. We know this from the Bible. We know Nazareth [Adama] from the Bible. It is only today that they changed the names [of these cities] to Modjo and Adama.” The attacks intensified this year, in the hopes of annexing the mineral-rich Wollega zones (East, Horo Gudru, Kellem and West), leaving, as a result, hundreds of civilians dead and tens of thousands displaced.

The conflict in Western Oromia broke out in 2019, after disagreements between the federal government and commanders of the OLA under the leadership of Kuma Diribsa known by his nom de guerre Jaal Maroo. The civil conflict further widened to include Southern, Central and Northern Oromia with regular clashes in Eastern Oromia, leaving in its trail unimaginable human suffering.

Amid internet blackout and limited cellular connection, civilians in Western Oromia carried the brunt of the civil conflict, with brutal crackdown by Oromia special forces that involved arbitrary arrests, extrajudicial killings and forced evictions. The most notable case was the public execution of 17 years old Amanuel Wondimu.

We spoke to residents in Horo Gudru. Survivors detailed a sudden attack by a militia they identified as Fano and complained about the inaction of both the federal and regional governments. Residents disagreed with reports that suggested Fano attacks were retribution for similar attacks by OLA against Amhara in Western Oromia; and painted a different picture.

An ethnic Oromo survivor of the recent attack in Jarte Jardaga who spoke on condition of anonymity said, “I doubt these attacks have anything to do with OLA.” He went on to add, “There is a possibility that this is an ethnic cleansing campaign to displace Oromo residents in the area in an attempt to annex the area into the Amhara region just like what happened in the Tigray war.”

Ibsa, a 29 years old community organizer who resides in Agamsa district of Horo Gudru echoed these sentiments. He said, “Attacks from across the border were happening since last year but they intensified this year,” adding, “We were already bearing the brunt of the conflict in the area from regional forces but the involvement of Fano will only make things worse.”

Gobena Galata, a father and resident of Jarte Jardaga who was recently displaced by Fano attacks said in a video widely circulated on social media, “I am just a working man who is not involved in politics, what are the reasons I am being attacked for?” He, like thousands of his peers displaced by the recent attack, had no choice but to flee, leaving their homes, and everything they own behind.

Earlier this year and on a secret visit to Wollega zone, the densely populated and lively trade villages looked like ghost towns. Scenes of destruction, abandoned and burned down houses were noticeable along the road. Farms were abandoned with owners seeking refuge in the neighboring Shewa zones or in major cities like Neqemte. The heavy presence of security forces, meant a danger to our lives if we recorded what we witnessed.

It goes beyond Wollega. As stipulated by Dawit Woldegiorgos, the former deputy foreign minister in the Mengistu Haile Mariam regime in a recent interview with US-based Amharic language media, “Amharas are a strong people. If they get a strong leadership, I believe they will retake Wollega and other lands that have been taken from them by Oromos.”

In Wollega, the attacks came under the pretext of protecting Amhara lives; however, other parts of Oromia were not spared. Earlier this year, Amhara special forces backed with irregular militias suspected to be Fano annexed 280 hectares of land in the Kimbibit district of North Shewa zone in Oromia into the Amhara region. Pleas by the district administration were met with official silence from both federal and regional government

Fano involvement goes beyond the retaking of “lost Amhara lands”. It has been implicated in gruesome atrocities such as the ethnic cleansing of minorities in the Amhara region; namely, Oromos in the Oromo Special and north Shewa zones and ethnic Qimant in the North Gondar zone of the region.

Communal violence between the Wollo Oromo community and Amhara residents of the Oromo special zone were a recurring event over the past 30 years. While both groups suffered, elders from both communities successfully avoided large-scale communal violence using traditional means of conflict resolution.

However, the violence escalated recently when the regional special forces and Fano militia became involved. The violence reached a peak in 2021 when Amhara special forces shot and killed an imam from the Wollo Oromo community in front of a mosque in Ataye town.

The violence that followed left hundreds dead, hundreds more injured and tens of thousands displaced. The magnitude of the renewed conflict forced federal authorities to lay the blame at the feet of the Amhara regional government and impose a command post in three zones affected by the violence. However, the violence did not stop. Immediately after the redeployment of federal forces to the northern frontier in Tigray, the conflict resurfaced.

This time and due to the absence of protection from federal forces, Wollo Oromos were forced to fend off attacks by the heavily armed Fano militia who are backed by regional special forces.

According to Hasan Ahmed, 29, a resident of Kemise town and a community organizer, attacks by Fano militias have been intensifying. “Ever since the withdrawal of Tigrayan forces, we have been blamed for cooperating with the enemy and the attacks have only gotten worse,” he said, adding, “but we have been preparing for that possibility and the lives lost have been reduced to a minimum.”

Hassan, however, expressed concern that the continued armament of Fano and the failure of the regional government to halt their activities could have dire consequences. He said, “Many Oromos have left for Oromia to find work and shelter and if Fano is not out of the equation, I fear the area will see a dramatic demographic change.”

Civilians in the area accuse federal authorities of turning a blind eye to the involvement of Fano in these atrocities, despite the overwhelming evidence. Recently the Ethiopian Human Rights Commission published a statement on the massacre in Jarte Jardaga. The EHRC blamed an unknown Amhara militia and OLA for the recent violence in the district.

However, Odaa Tarbi, the OLA spokesperson denied the group involvement and accused the EHRC of covering what he described as a “Fano genocidal campaign in Oromia.” He added in a series of posts on social media, “The regime considers Fano’s massacre of Oromo civilians as a necessary part of its campaign against the OLA.”

Odaa Tarbi’s sentiment is shared by many survivors of the recent violence in Horo Gudru. A female survivor of the recent attack in Jarte Jardaga who asked to stay anonymous told us, “You know it feels like the government wants this. Losing territory is not as important to them as defeating OLA.” She further added, “Those bloodthirsty criminals raped women in the hundreds and thousands in Tigray. Why would anyone think they will be different in Oromia.”

“Both the regional and federal governments know that it is Fano who is attacking us. In fact, officials in our parliament tried to justify their silence by accusing us of supporting the OLA,” said Bekele, 31 another survivor, while lamenting, “They think we deserve it.”

Similar sentiments were echoed in a session of the regional parliament by the head of the Oromia branch of the ruling Prosperity Party, Fikadu Tessema, who said: “In order to catch the fish (OLA), you have to dry the ocean (its civilian support base).” 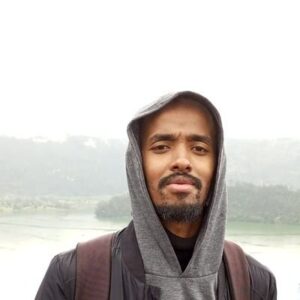 Bileh Jelan
Bileh Jelan is a freelance journalist who covers Ethiopia, the Horn of Africa and the Middle East. He can be reached at bilehj.adem@gmail.com.