Oromia, Ethiopia’s largest and most populous region, has been in civil war for the last four years. The Oromo ethnic group, who are estimated to constitute 40 percent of the country’s population, has been experiencing civil war, even before Abiy came to power. But the war has intensified since he was appointed, as the federal troops kill and maim Oromos. Members of the community claim to have suffered discrimination and oppression at the hands of the successive Ethiopian governments. In 2018, Qeerroos and Qarrees (youth) declared “we won” when the 42 years old Prime Minister, Abiy Ahmed, ascended to power. Within a few months, Ahmed Abiy did a sweeping reform by releasing political prisoners and allowing back into the country rebel groups like Oromo Liberation Front, and Ginbot 7, among other exiled groups. In Oromia, people celebrated, and their expectation of a new era was raised. But their celebration was short-lived.

A few months after Oromo Liberation Front made a grand entry to Ethiopia in 2018, the Ethiopian government commenced mass arrests of its supporters; forceful conscription, and airstrikes by the Ethiopian National Defence Force hence leading to mass displacement in Oromia. The Ethiopian government portrayed OLF as a violent entity with an ill motive to destabilize Oromia. Recently there is an increase in defamation and denunciation of Oromo political leaders by the government. Political leaders from the region are arbitrarily arrested, others killed and others disappear without a trace.

Big powers like the USA, and EU have failed in calling for Oromo justice and have turned a blind eye to maiming and killing happening in Oromia. From 4th to 7th November 2021, the US Special envoy for the Horn of Africa Jeffrey Feltman met Ethiopia’s government officials including Prime Minister Abiy Ahmed, Foreign Minister Demeke Mekonnen Hasan, and UN, AU representatives but didn’t meet Oromo-affiliated organizations.

Since coming to power, Abiy Ahmed has put several zones under command posts due to the conflict between OLA and his government. In two and half years, the Ethiopian government forces have killed 1701 civilians. The Ethiopian government continues its war in Wallaga, Guji, and Borana zone.  The scale at which forces loyal to the Prime minister are killing people in Oromia is eclipsing wanton abuse committed in Tigray. Execution of civilians across the region is done by government forces. The level of violence carried out against civilians in Oromia in the last several months has risen in the name of rooting out “OLF Shene members”. Indiscriminate air strikes on civilians in North Shewa, Abuna Gindabarat district have resulted in the deaths of more than 30 civilians and caused the displacement of 400 civilians.

On April 22, 2022, more than 40 civilians were summarily executed by Oromia special forces in West Shoa, Adaa Bargaa district. On the same day, 22 civilians were killed by government forces in West Guji. In West Wollega, the worsening security situation has significantly impacted the population’s access to essential services with no help from the government. In Guji, access to healthcare remains highly compromised due to insecurity posed by security forces. The humanitarian situation response has been suspended and completely stopped. The situation has worsened in 2021 because of increased insecurity posed by unidentified armed groups and security forces. According to the Zonal government, in Guji there are 103,000 conflict-induced-IDPs.

This number is expected to shoot up as a conflict balloon. In data documented by Oromo Youth for Freedom, from October 10, 2021, to December 3, 2021, 213 people were killed by Government soldiers. Much of the Western Oromia, North Shewa, West Shewa, Guji, and Borana is under the Oromo Liberation Army. At the same time, In Hararghe, West Shewa, and Bale, OLA has ramped up its operations. Dozens of health facilities have been vandalized; 18 in Liban woreda (Guji), and 9 in Bule Hora Woreda (West Guji) alone. Moreover, parties to the conflict have occupied schools and other public and community facilities disrupting educational activities. Population access to livelihood is also negatively impacted. Security restrictions, coupled with insecurity related to the presence of armed conflict have limited mobility in the region. Recently, drone attacks from regime forces have increased.

In early 2021, the United Nations Office for Coordination of Humanitarian Affairs reported that there are over 23.5 million people in need of humanitarian assistance in Ethiopia. The report stated that 6.7 million people in Oromia need humanitarian assistance and 40 percent of all severe acute malnutrition cases are in Oromia. The ongoing conflict has impacted livelihood as conflict stopped communities from engaging in agricultural activities. This has in turn led to an increase in food insecurity, reduction in farm inputs, road inaccessibility, and increased food prices. With climate shocks and conflict compounded with inter-communal violence stemming from long-standing ethnic grievances, inequity in regard to access to resources has exacerbated humanitarian needs.

Most internationally displaced persons are found in Oromia. An alarming fifty-six percent of displaced persons are in Oromia. Most of these IDPs are unsettled and have limited access to water, sanitation, and hygiene facilities. Women and girls trek long distances to reach wash facilities. In 2020, rural areas in Oromia had the highest rate of malnutrition with Oromia accounting for nearly forty percent of national severe acute malnutrition cases. Schools in Oromia are used as security posts by security forces allied to the government. Shutting down of the internet has limited the ability to collect, assess and share information on emerging information needs in Oromia.

On 29th December 2021, the House of Peoples’ Representatives (HOPR) approved a proclamation of the National Dialogue Commission. The proclamation was supposed to have three years term. According to NDC, its main objective was to resolve different opinions and disagreements among various political parties and all segments of Ethiopia on the most fundamental national issues through broad-based inclusive public dialogue. Many concerned parties have voiced their doubts about the national dialogue. In Oromia, the main opposition groups haven’t been invited. In a parliamentary session on 22nd February 2022,  the  Prime Minister gave no indications that his government is intending to negotiate with rebel groups.

As rhetoric between the government and rebel groups escalates in northern Ethiopia, civil war in Oromia is given a blind eye by all the global media powerhouse. Major news outlets such as Associated Press, Washington Post, and New York Times haven’t majorly covered the civil war in Oromia. Incomplete media coverage has exacerbated the conflict and spread of fake news by the pro-government media houses. Western and Southern Oromia is experiencing internet blackout and is always under command post. In this information age, images and news have a decisive impact on the outcome of armed conflict. Media reports from conflict zones serve the public interest. The war in Oromia waged by PM Abiy Ahmed doesn’t feature in any international media houses.

Maintaining stability in Oromia is necessary to ensure stability in the entire Horn of Africa. If one wishes to call for stability throughout Ethiopia, one should call for the inclusion of Oromos at the table. Ignoring the conflict in Oromia and Oromos, who constitute 40 percent of the country’s population, will only derail the much-sought national dialogue. 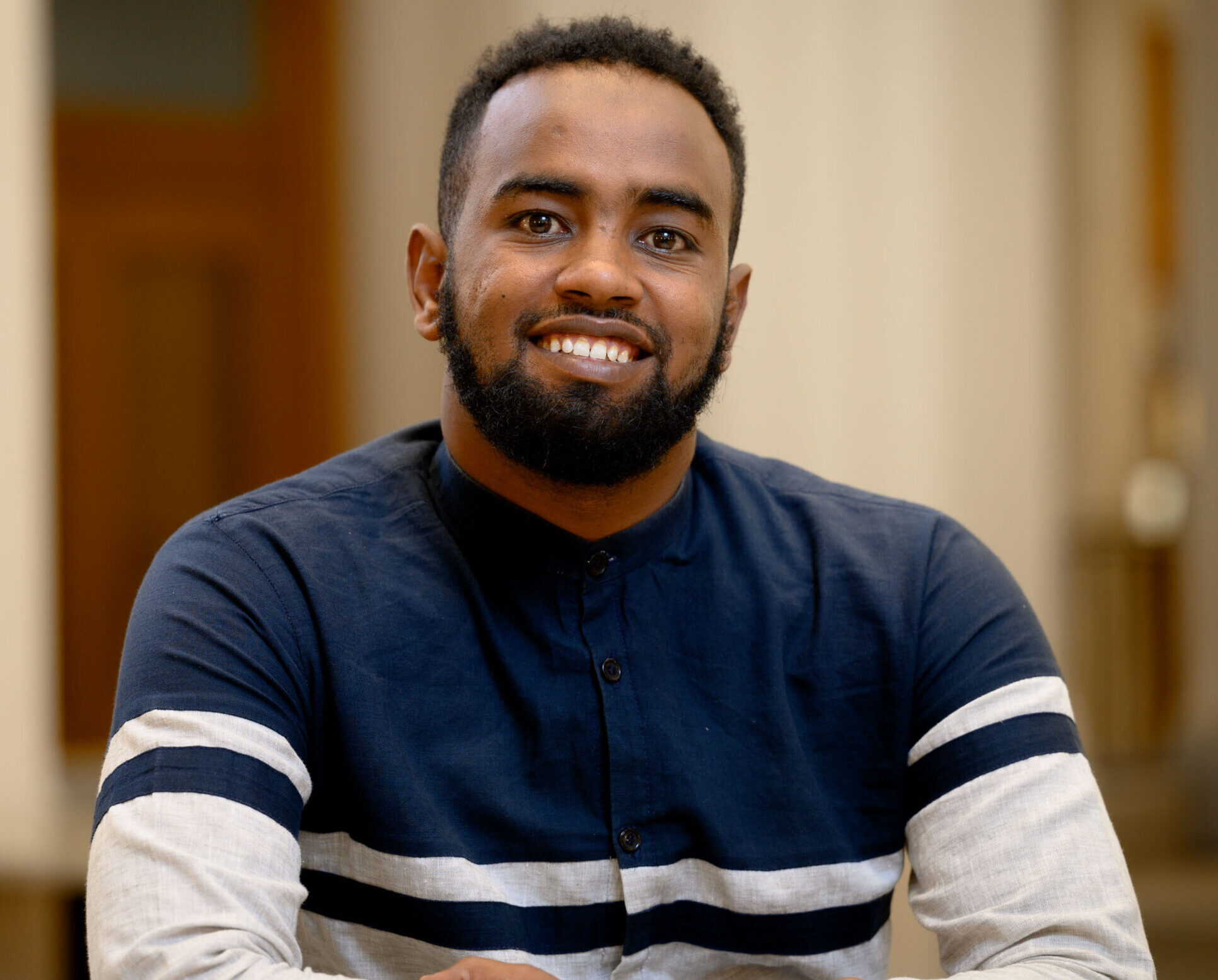 Halkano Boru
Halkano Boru is a Global Affairs graduate student at the University of Notre Dame.