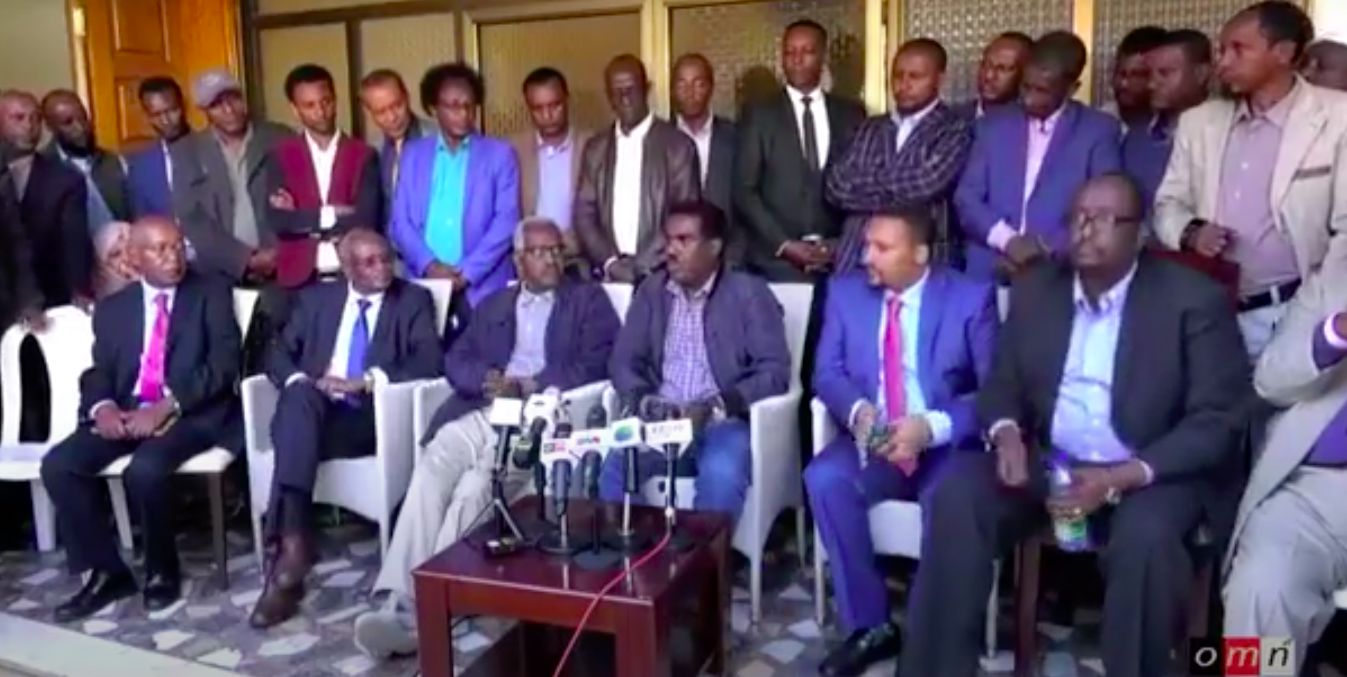 The Oromo Elite: a tale of cowardice, mistrust, and unworthiness.

I recently listened to an interview given by Getachew Reda, the spokesperson of the Tigray People’s Liberation Front (TPLF), in which he spoke about separatist movements within the Tigray region.

I observed that the autocrat, despite showing signs of inclination by the old guard of TPLF to remain within the federation and even rule it again from Arat Kilo (a term commonly used to refer to the official residence of  Ethiopia’s rulers),  made it clear that what the party wants will be overruled by the demands of the people of Tigray.

As an Oromo, I do not trust the words of the TPLF leadership nor their promises, but Getachew’s comments took me on a journey where I tried to find an Oromo politician that did not shy away from asserting secession as an option and even as bargaining chip like TPLF is doing at the moment, but sadly during my search, I found none except the fathers of Oromo nationalism who fled persecution to Somalia, sought and secured the help of its government and engaged in peaceful or violent means with the aim of securing Oromia’s independence.

Nevertheless, some of these founding fathers gave in to a poisonous notion that the Ethiopian project can be fixed and be made beneficial to the people they once defended. Some participated in the talks of the transitional government that was formed in the 1990s under the leadership of perhaps Ethiopia’s last strong man, Meles Zenawi, only to regret their actions later on their deathbeds.

In these trying times, where the TPLF (The architects of the current ethnic-based federal arrangement), speak openly about secession, the Oromo political elite cower from presenting secession as a viable option for the Oromo.

It became more apparent to me after I had a conversation with a leader of one of Oromia’s leading political parties; I brought up secession as a viable option that might be necessary to answer the Oromo question once and for all. And to my surprise, the leader who lives in Finfinne, is a beneficiary of state institutions and most likely never had a conversation with an ordinary Oromo dismissed my talk of secession as ‘far-fetched’ and tried to convince me that Oromos are not capable of forming a sovereign state.

It hit me right then and there that our elite are disconnected from ordinary Oromos, and are more concerned with ruling over their arch enemy —the Amhara elite. Such a stream of thought is dominant among Oromo decision-makers and can only be understood from a psychological aspect. The easiest interpretation is that this elite class struggles with an inferiority complex so deep and perplexing with disastrous effects on our collective struggle for freedom.

I then started doing research to exactly pinpoint arguments used throughout history to justify the Oromo staying within the Ethiopia project and undermine an Independent Oromia project.

I was finally able to narrow these arguments to three major arguments; their advocates often use historical, societal, economical, and geopolitical factors and factors to support them.

The first and most used argument is based on historical factors and it goes: “The Oromo is an integral part of the Ethiopian state, and helped shape and form it.” An argument that sits on the historical fact that the army of Menelik II was only made more powerful by the existence of Oromo warlords who helped both claim victory at Adwa and consolidate his rule over the south.

This argument seems to intentionally overlook the fact that said Oromo warlords who were in Menelik’s army were butcherers and slavers of the Oromo themselves. In addition, this is the argument that best fits the narrative of advocates of a homogeneous Ethiopia of one language, one faith, and one identity. And as the famous saying goes, “if you are a black person and racists love you, you must be doing something wrong.”

The second argument which uses economical and geopolitical factors as a base and is used often to disenfranchise those who defeat the first argument is that “The Oromo is not capable of forming a sovereign nation because having natural resources and a big territory is not enough. You have to have good relations with your neighbors.” Advocates of this argument tend to compare a non-existent independent Oromia with failing Eritrea.

However, advocates of this argument fail to understand and most often seek to ignore the contrast that is Eritrea and Oromia.  Eritrea, an independent and internationally recognized state, lacks the basic components of a successful state: nationhood, natural resources, and goodwill with neighbors.

Eritrea from its onset lost goodwill with its neighbors due to series of conflicts instigated by Eritrea (Ethiopian-Eritrean war 1998-2000 and Eritrea – Djibouti border conflict 2008), is a state of 9 nations, and have no tangible natural resources with the exception of the Red Sea. Oromia however, is home to one nation, rich with natural resources, and since it has not become independent remains open to have goodwill with its neighbors.

The third and final, and may I add, the most convincing argument is that “Oromia can not succeed as a state because we don’t have consensus.”

In a perfect world where Oromo elites invest their time and resources to ensure the creation of national Identity and apply indigenous values to solving internal conflicts amongst themselves and the wider Oromo society, but fail to do so, I would have been a supporter of this argument and perhaps worked hand in hand with them to achieve a common goal through peaceful and democratic ways.

But on the contrary, I live in a world where Oromo elites invest their limited resources in seeking power and most often use existing challenges to their advantage. Some, including myself, would even argue that our elites have proven themselves to be cowards, opportunistic, and wary of a collective Oromo awakening that might threaten to hold them accountable for all their misgivings and strip away their privileges.