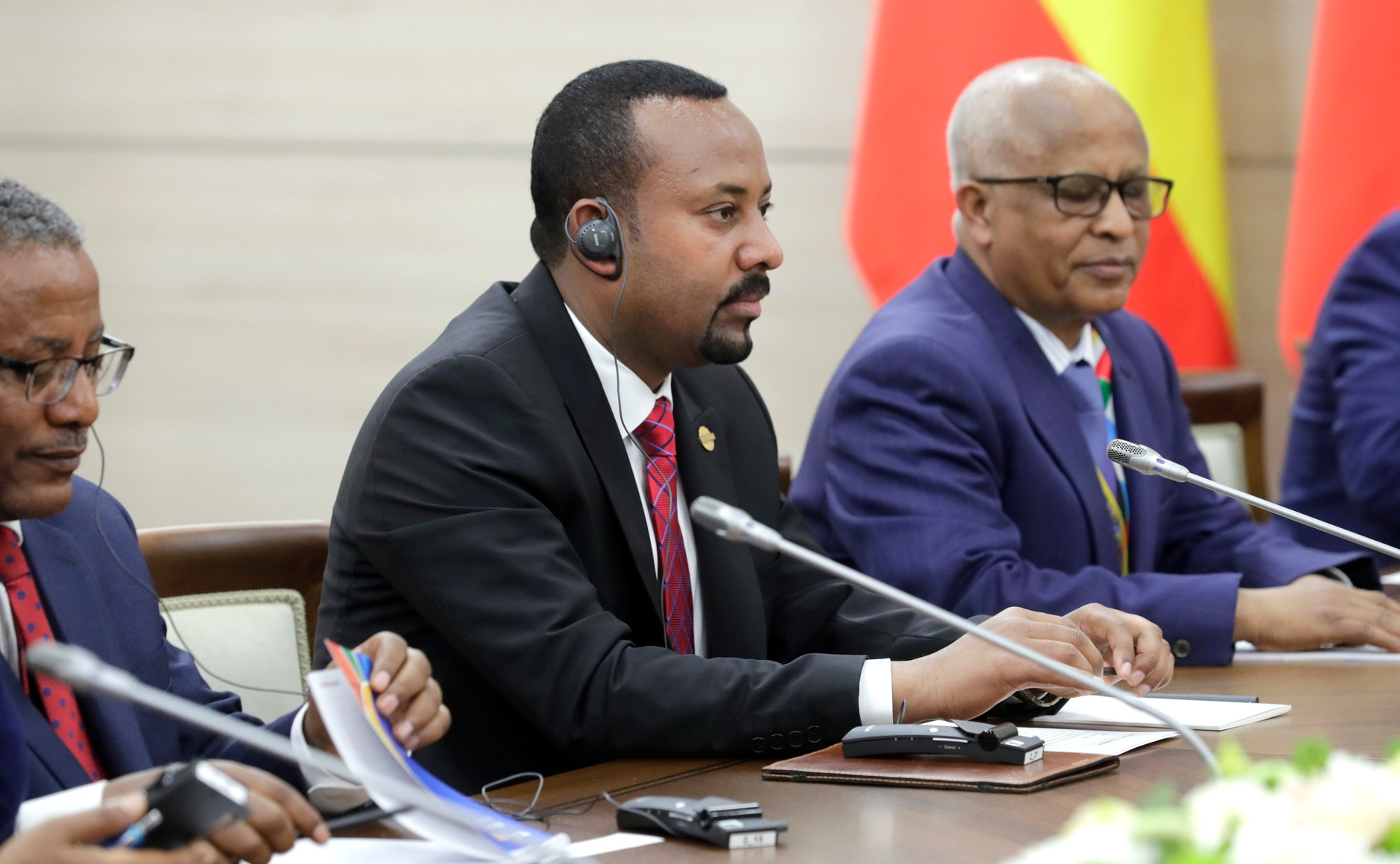 The Nobel Peace Prize That Paved the Way for War

Secret meetings with a dictator. Clandestine  troop movements. Months of quiet preparation for a war that was supposed to be swift and bloodless.

New evidence shows that Ethiopia’s prime minister, Abiy Ahmed, had been planning a military campaign in the northern Tigray region for months before war erupted one year ago, setting off a cascade of destruction and ethnic violence that has engulfed Ethiopia, Africa’s second most populous country.

Mr. Abiy, a Nobel Peace Prize laureate seen recently in fatigues commanding troops on the battlefront, insists that war was foisted upon him — that ethnic Tigrayan fighters fired the first shots in November 2020 when they attacked a federal military base in Tigray, slaughtering soldiers in their beds. That account has become an article of faith for Mr. Abiy and his supporters.

In fact, it was a war of choice for Mr. Abiy — one with wheels set in motion even before the Nobel Peace Prize in 2019 that turned him, for a time, into a global icon of nonviolence.

The Nobel win stemmed largely from the unlikely peace deal Mr. Abiy struck with Isaias Afwerki, the authoritarian leader of Eritrea, within months of coming to power in 2018. That pact ended two decades of hostility and war between the neighboring rivals, and inspired lofty hopes for a transformed region.

Instead, the Nobel emboldened Mr. Abiy and Mr. Isaias to secretly plot a course for war against their mutual foes in Tigray, according to current and former Ethiopian officials who spoke on the condition of anonymity to avoid reprisals or protect family members inside Ethiopia.

In the months before fighting erupted in November 2020, Mr. Abiy moved troops toward Tigray and sent military cargo planes into Eritrea. Behind closed doors, his advisers and military generals debated the merits of a conflict. Those who disagreed were fired, interrogated at gunpoint or forced to leave.

Still dazzled by Mr. Abiy’s Nobel, the West ignored those warning signs, the officials said. But ultimately it helped to pave the way to war. “From that day, Abiy felt he was one of the most influential personalities in the world,” Gebremeskel Kassa, a former senior Abiy administration official now in exile in Europe, said in an interview.

“He felt he had a lot of international support, and that if he went to war in Tigray, nothing would happen. And he was right,” he added.

Mr. Abiy’s spokeswoman, the information minister of Eritrea, and the Norwegian Nobel Committee did not respond to questions for this article.

The quick and easy military victory that Mr. Abiy promised has not come to pass. The Tigrayans routed the Ethiopian troops and their Eritrean allies over the summer and last month came within 160 miles of the capital, Addis Ababa — prompting Mr. Abiy to declare a state of emergency.

Recently, the pendulum has swung back, with government forces retaking two strategic towns that had been captured by the Tigrayans — the latest twist in a conflict that has already cost tens of thousands of lives and pushed hundreds of thousands into famine-like conditions.

Analysts say that Mr. Abiy’s journey from peacemaker to battlefield commander is a cautionary tale of how the West, desperate to find a new hero in Africa, got this leader spectacularly wrong.

“The West needs to make up for its mistakes in Ethiopia,” said Alex Rondos, formerly the European Union’s top diplomat in the Horn of Africa. “It misjudged Abiy. It empowered Isaias. Now the issue is whether a country of 110 million people can be prevented from unraveling.”

The Nobel Committee Takes a Chance

Accepting the Nobel Peace Prize in December 2019, Mr. Abiy, a former soldier, drew on his own experience to eloquently capture the horror of conflict.

“War is the epitome of hell,” he told a distinguished audience at Oslo City Hall. “I know because I have been there and back.”

To his foreign admirers, the soaring rhetoric was further proof of an exceptional leader. In his first months in power, Mr. Abiy, then 41, freed political prisoners, unshackled the press and promised free elections in Ethiopia. His peace deal with Eritrea, a pariah state, was a political moonshot for the strife-torn Horn of Africa region.

Even so, the five-member Norwegian Nobel Committee knew it was taking a chance on Mr. Abiy, said Henrik Urdal of Peace Research Institute Oslo, which analyzes the committee’s decisions.

Mr. Abiy’s sweeping reforms were fragile and easily reversible, Mr. Urdal said, and the peace with Eritrea centered on his relationship with Mr. Isaias, a ruthless and battle-hardened autocrat.

“My partner and comrade-in-peace,” Mr. Abiy called him in Oslo.

Many Ethiopians also wanted to believe in Mr. Abiy’s promise. At a gala dinner for the new prime minister in Washington in July 2018, Dr. Kontie Moussa, an Ethiopian living in Sweden, announced to applause that he was nominating Mr. Abiy for a Nobel Peace Prize.

Back in Sweden, Dr. Kontie persuaded Anders Österberg, a parliamentarian from a low-income Stockholm district with a large immigrant population, to join his cause. Mr. Österberg traveled to Ethiopia, met with Mr. Abiy and was impressed.

He signed the Nobel papers — one of at least two nominations for Mr. Abiy that year.

In selecting Mr. Abiy, the Nobel Committee hoped to encourage him further down the path of democratic reforms, Mr. Urdal said.

Even then, though, there were signs that Mr. Abiy’s peace deal wasn’t all it seemed.

Its initial fruits, like daily commercial flights between the two countrie and reopened borders, were rolled back or reversed in a matter of months. Promised trade pacts failed to materialize, and there was little concrete cooperation, the Ethiopian officials said.

The Eritreans were particularly interested in Tigray, he said.

Mr. Isaias had a long and bitter grudge against the Tigray People’s Liberation Front, which dominated Ethiopia for nearly three decades until Mr. Abiy came to power in 2018. He blamed Tigrayan leaders for the fierce border war of 1998 to 2000 between Ethiopia and Eritrea, a former province of Ethiopia, in which as many as 100,000 people were killed. He also blamed them for Eritrea’s painful international isolation, including United Nations sanctions.

For Mr. Abiy, it was more complicated.

He served in the T.P.L.F.-dominated governing coalition for eight years and was made a minister in 2015. But as an ethnic Oromo, Ethiopia’s largest ethnic group, he never felt fully accepted by Tigrayans and suffered numerous humiliations, former officials and friends said.

Tigrayans fired Mr. Abiy from his leadership position at a powerful intelligence agency in 2010. In power, he came to see the Tigrayans, still smarting from their ouster, as the biggest threat to his burgeoning ambitions.

A Spy Chief Among the Singers and Dancers

Mr. Abiy and Mr. Isaias met at least 14 times from the time they signed the peace deal until war broke out, public records and news reports show.

They also met in secret: On at least three other occasions in 2019 and 2020, Mr. Isaias flew into Addis Ababa unannounced, one former official said. Aviation authorities were instructed to keep quiet, and an unmarked car was sent to take him to Mr. Abiy’s compound.

Around that time, Eritrean officials also regularly visited the Amhara region, which has a long history of rivalry with Tigray. Crowds thronged the streets when Mr. Isaias visited the ancient Amhara city of Gondar in November 2018, chanting, “Isaias, Isaias, Isaias!”

Later, a troupe of Eritrean singers and dancers visited Amhara. But the delegation included Eritrea’s spy chief, Abraha Kassa, who used the trip to meet with Amhara security leaders, the senior Ethiopian official said. Eritrea later agreed to train 60,000 troops from the Amhara Special Forces, a paramilitary unit that later deployed to Tigray.

Speaking at the World Economic Forum in Davos, Switzerland, in February 2019, Mr. Abiy advocated an effective merger of Ethiopia, Eritrea and Djibouti — a suggestion that dismayed Ethiopian officials who saw it as straight from the playbook of Mr. Isaias.

Aides also saw the remarks as further proof of Mr. Abiy’s impulsive tendencies, leading them to cancel his news conference during the Nobel ceremonies in Oslo 10 months later.

Mr. Abiy viewed the Tigrayans as a threat to his authority — perhaps even his life — from his first days in power.

The Tigrayans had preferred another candidate as prime minister, and Mr. Abiy told friends he feared Tigrayan security officials were trying to assassinate him, an acquaintance said.

At the prime minister’s residence, soldiers were ordered to stand guard on every floor. Mr. Abiy purged ethnic Tigrayans from his security detail and created the Republican Guard, a handpicked unit under his direct control, whose troops were sent for training to the United Arab Emirates — a powerful new ally also close to Mr. Isaias, a former Ethiopian official said.

The unexplained killing of the Ethiopian military chief, Gen. Seare Mekonnen, an ethnic Tigrayan who was shot dead by a bodyguard in June 2019, heightened tensions.

The rift with the Tigrayans was also driven by profound political differences. Within weeks of the Nobel Prize decision, Mr. Abiy created the Prosperity Party, which incarnated his vision of a strong, centralized Ethiopian government.

But that vision was anathema to the millions of Ethiopians who yearned for greater regional autonomy — in particular the Tigrayans and members of his own ethnic group, the Oromo.

Accounting for about one-third of the country’s 110 million people, the Oromo have long felt excluded from power. Many hoped Mr. Abiy’s rise would change that.

But the Prosperity Party catered to Mr. Abiy’s ambitions, not theirs, and in late 2019 violent clashes between police officers and protesters erupted across the Oromia region, culminating in the death in June 2020 of a popular singer.

Against this tumultuous backdrop, the slide toward war accelerated.

By then the Tigrayans were also gearing up for war, searching for allies in the Northern Command, Ethiopia’s most powerful military unit, which was based in Tigray.

In September the Tigrayans went ahead with a regional election, in open defiance of an order from Mr. Abiy. Mr. Abiy moved troops from the Somali and Oromia regions toward Tigray.

In a video conference call in mid-October, Mr. Abiy told governing party officials that he would intervene militarily in Tigray, and that it would take only three to five days to oust the region’s leaders, said Mr. Gebremeskel, the former senior official now in exile.

On Nov. 2 the European Union foreign policy chief, Josep Borrell Fontelles, publicly appealed to both sides to halt “provocative military deployments.” The next evening, Tigrayan forces attacked an Ethiopian military base, calling it a pre-emptive strike.