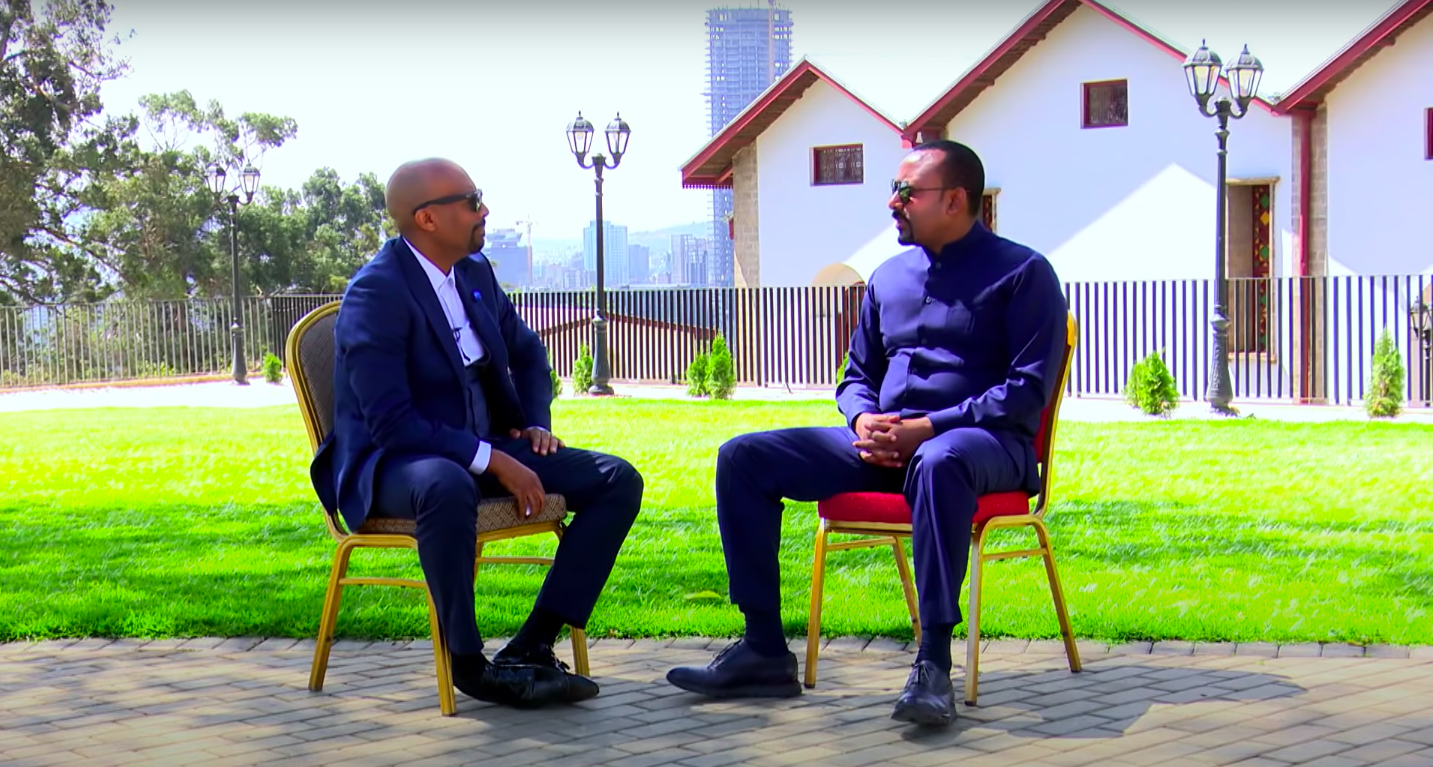 The Ethiopian Racist: the Afro-phobic Roots of Amhara Supremacy in Ethiopia.

“Seifu on EBS” is a popular Amharic talk show in Ethiopia. As a matter of fact, the most widely watched show of its kind in the country, which recently hosted PM Abiy Ahmed Ali himself. His peculiar guest for this special consideration: a famous long-time Amharic singer Elias Tebabel, well known to Ethiopians both in the country and in the Diaspora. When they met for this interview the combination was the boldest and black-on-black racist diatribe to be captured ever on live TV in the country.

After premising with welcoming and greeting formalities Seifu asks his guest, Elias Tebabel, to share a particularly memorable incident that took place some years back in Washington D.C.  Elias lives in the US.

Elias recounts:  “Ethiopian artists, including myself, annually participated in the African Cultural Festival, a show celebrated in Washington D.C. every year. This was my participation for the third year. On that particular night, there were 16 African countries that participated each with its own presentation of their respective country. The hosts wanted one of us to represent all and move to the stage. One flag had to be chosen. Representing Ghana was a Ghanian woman holding her country’s flag. I was standing holding the original Ethiopian flag without the star in the middle (i.e. flag of the deposed Ethiopian monarchy, not the official flag of Ethiopia today).  When they asked for one flag bearer to come forward to represent the group, the Ghanian woman started walking forward. I stopped her, as I told her ‘no no no, you can not represent Africa’. She was taken aback and objected asking what was wrong. And I said to her and others there: all of you can not represent Africa. I, bearing this Ethiopian flag is the only one who qualifies to represent Africa. In fact, if I wasn’t here, all of you would be Colonies of Europe, so only if I go forward can Africa be Africa.  This started a ruckus among those who were there, and one Arab stated ‘First, you have to feed yourself’ to me. The organizers, at this point, had to intervene, and one of them asked us to stop the argument. And I  immediately asked if there was a police or security around and if so, to report to where we were. The organizer asked me what I would need security for. My answer to him and others was: “There is a TERRORIST, innocent people killer here” as I pointed to the Arab fellow. He needs to be put under control. Immediately, the artist representing Nigeria exclaimed ‘he (referring to the Arab fellow) is right, you (Elias Tebabel) should stop what you’re doing.’ And I  turned to him and told the Nigerian artist: SHUT UP YOU MONKEY. And immediately, the organizer who is himself WHITE was so amused at me calling the Nigerian monkey, he started laughing as he exclaimed ‘he called the monkey ‘ Monkey’; and ran out of the room amused.”

(the below videos are examples that show Amhara’s sense of non-blackness and their racism towards other ethnic groups in Ethiopia, such as the Oromo, Sidama, Somali, etc., as well as other Africans,  past and present. )

The audience at Seifu on EBS applauds in approval as they erupt in amused laughter.

First of all, this particular incident recounted by Tebabel was INTENTIONALLY requested for airing by the talk show host Seifu himself. Had such libelous material was entertained by any mainstream talk show host in the U.S. or Europe it would have received orchestrated condemnation by rights groups and the general populace. Needless to say, had such material was intentionally uttered by any known artist he would face public outrage for such expressions of prejudice, hate, and racism against blacks and Arabs. In Ethiopia, however, he gets a popular platform by the well established privileged urban elite and rousing applause from their mob-like equally bigoted audience as a topping.

This is an emblematic and clear instance of raw, unapologetic, vicious black-on-black racism that has always be latent, and in fact, rife in Ethiopia. There is a deliberately concealed collective syndrome, in Ethiopia. Racism against non-Amhara Ethiopians and African blacks is its best kept dark secret. It most adversely ails the socially and economically privileged urban-elitist class that was put in place by Ethiopia’s deposed Monarchy of the past, culminating in the 60s. Its cultural dogmas and Amhara supremacist norms are rapidly becoming State Policy in Ethiopia today.

Such black-on-black racism and bigotry, historically, was particularly directed against non-Amharic speaking natives of Ethiopia, among which Oromo and others in the South of Ethiopia are prime.

They called the Oromo “Galla”, a pejorative term with equivalent meant for the Oromo akin to being called a “nigger” by a White Supremacist.  In meaning, it amounted to uncivilized, inferior, savage, and ignorant. Past Ethiopian Colonial and Imperial rule is known by Ethiopians as the “Neftenya system” (those who rule by “European” guns) codified and used such demeaning categories as official State policy against its colonized indigenous people of the South like the Oromo, Wolayita, Sidama, Somali, etc. The State Policy was known as Amharanization, referring to its mandate for Amharic, a single minority ethnic group’s language and culture be officially and forcibly imposed and replace the others.

To survive in that Amhara-centric system non-Amharas had to change their personal names into Amharic. Non-Amhara localities as in regions or towns were officially reassigned Amharic names. Concisely put indigenous African languages, cultures, and heritage were relinquished bowing to this Amhara supremacist policy.

It is also common to hear the same group in Ethiopia call most southern Ethiopians,  be it Gumuz, Benishangul, Kaffa, Nuer, Anyuak, or one of any other tens of them that are non-Amhara because of their perceived and  derided darker skin complexion “Barya” in Amharic, meaning ‘slave.’ It is socially very common among many Ethiopians that uphold this prejudice even today to hear them call other Africans ‘bariya.’

Many of Ethiopia’s non-Amharic speaking groups and individuals have lived with it all their lives. Millions of Oromos from the 1880s until the early 1990s —when the Multi-National Constitution that accorded rights to different Nations and Nationalities in Ethiopia was ratified— were forced to change their Oromo, Sidama, Wolayita names into Amharic to even survive, get an education, get a job, or escape State-sanctioned persecution. They endured the insults and degradation that these “Ethiopians” (i.e. Amharanizing ruling systems and lineage) that claim superiority to the rest of the black race imposed on them on daily basis.

This seemingly amusing stint witnessed on a pop culture show in Ethiopia is not amusing nor insignificant to Ethiopia’s oppressed Nation and Nationalities like Oromo and others that culturally faced such indignities for over a century and counting.

It is a small, yet poignant representation of the linguistic, cultural, economic, and political denials and social ‘othering’ they have endured and struggled to change for over a century. 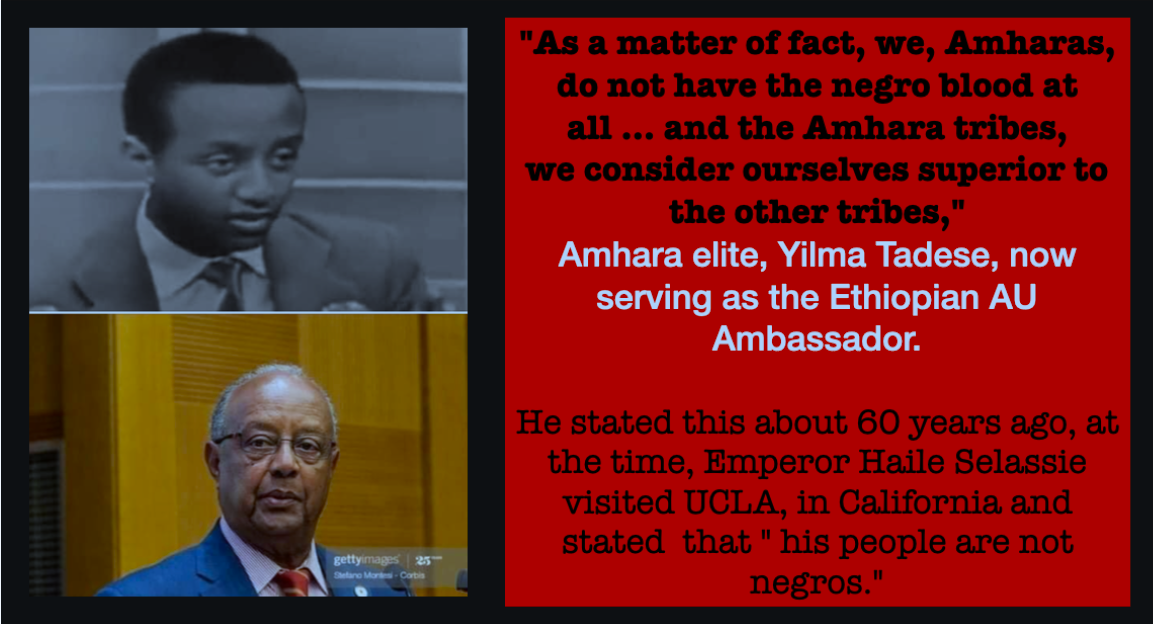 This Amharanizing, inherently black-on-black racist and discriminating culture is politically on the rise today, as Abiy Ahmed Ali tries to dismantle the Multi-National Constitution and Federalism of Ethiopia. The language, culture, and political autonomy of Ethiopia’s non-Amharic speaking population, which form an overwhelming majority is in danger once again. This has to end, not only because it represents a loss of majority Ethiopians but also for Africa.

Failing to acknowledge injustice anywhere is breeding and exacerbating injustice everywhere. No freedom, no peace, no democracy, and no prosperity shall come to the marginalized poor and systematically oppressed people until such discriminatory thinking and romanticism of oppressive norms demonstrated in this blatantly racist and deplorable interview, is publicly condemned and disowned. Justice, tolerance, and democratic diversity flourish in Africa when such black-on-black racism is identified and thrown into the dustbin of history where it belongs; not when it is flaunted in public media as a badge of honor.