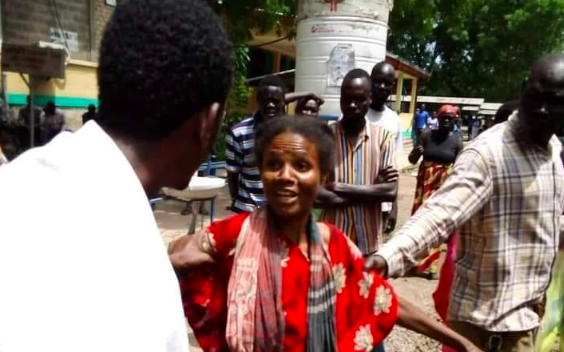 A picture of an Oromo mother of three, moments before she was killed by Gambella State security forces on June 15, 2022.

Finfinne – In its statement released on June 17, 2022, the Oromo Federalist Congress (OFC) said extrajudicial killings carried out by government forces in various areas across Oromia and the Gambella region indicate Ethiopia is repeating the infamous 1976-1978 “Red Terror” violence.

The statement emphasized that the incumbent party came to power through the peaceful struggle of the Oromo and peoples of other regions, but hope for change was dashed, hijacked by the power-hungry ruling party, leading the country into war, famine, and economic collapse.

Citing the expansion of the conflict, the statement said, “Fighting between government’s forces and the Oromo Liberation Army (OLA) continues in various parts of Oromia, and the scope of the conflict grows by the day. Clashes have been reported in various parts of Oromia in the last two weeks, particularly in East Shawa’s Fantalee and Bosat districts, as well as Dambi Dollo and Gimbi towns in Western Oromia.”

The statement indicated that the conflict has spread into neighboring regions, adding, “This week, Sunday, it spread to the Gambella Regional State, where armed groups launched an attack on government forces in the regional capital, Gambella City, causing heavy human casualties.”

“Following the attack, reports from the region indicate that a large number of civilians are being killed without trial by government security forces. A spokesperson for the Gambella Regional State told the media that there were civilians injured caught in the cross-fire during the clashes.”

“In this regard, ethnic Oromos in the Gambella region are being hunted, under the accusation that they are supporters of the Oromo Liberation Army (OLA), in violation of their constitutional right to freely live in the region. Yesterday, a horrific video circulated on various media outlets showing an unarmed young Oromo man, dressed in civilian clothes, with his hands tied behind his back being shot dead by plain-clothed government soldiers in the city center. This situation indicates that we are re-entering the 1976-1978 “Red terror” violence. OFC strongly condemns any killing of civilians.”

Following this, the statement released by the OFC called for an immediate end to attacks and displacement of civilians in various parts of Oromia.

It called for an investigation into the attack; particularly, the horrific video circulating on media outlets that shows the extra-judicial killings committed by government forces hence, an independent body should immediately investigate and take law enforcement action against the perpetrators of this horrific act.

It called for an immediate end to ethnic-based attacks on Oromo nationals living in Gambella, as well as full protection for citizens living in other parts of the country.

“We urge the regions to carry out their legal obligations.”

Finally, the Oromo Federalist Congress (OFC) said the root cause of the ongoing armed conflict in Oromia and other parts of the country is the result of political differences.

“We call for a ceasefire agreement to be reached and reiterate our call for a peaceful resolution.”