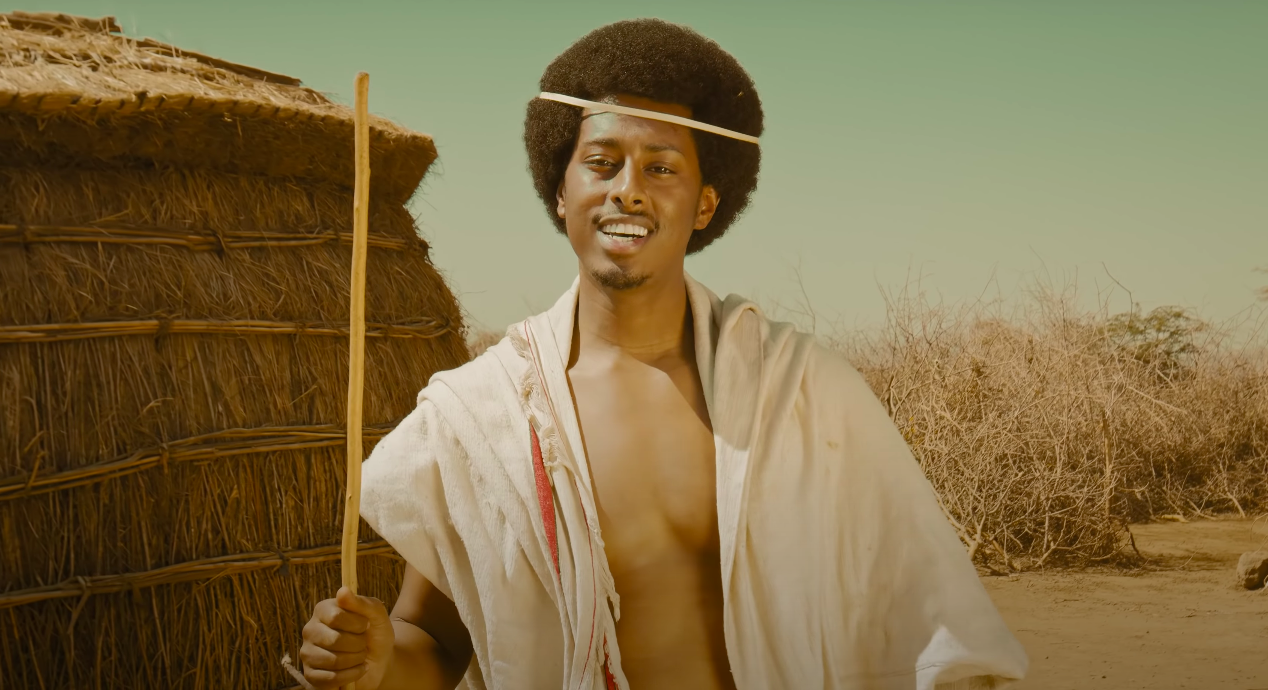 Artist Gutu Abera: “Don’t look back for there is no point in living where progress is not a possibility.”

In early September 2021, a music video titled “Hawanawa” was published on a YouTube channel named “Vision Entertainment“. In just a few days of its release, the music video had been watched by more than a million people, an impressive feat anywhere, but made even more impressive by the fact that the music is in Afaan Oromoo which is spoken in Ethiopia where the internet penetration isn’t so high and data prices are. The fact that this feat was achieved by someone relatively unknown in both the Oromo and Ethiopian music spaces just adds to what a phenomenon it was.

The music video features Gutu Abera, a 29-year-old born in the small town of Mandi in Wollega singing his heart out to a “bareedduu Shawaa” – the Shewa beauty. Crafted in the style of music that was popularized in the 1960s when American pop was just taking the world by storm, Hawanawa features young men and women in big afros that evoke bougie, but also many of the traditional Oromo dances such as Ragadaa and Shaggooyyee. As Gutu later told the BBC, the large soundstage the music features came from the fact that every sound included was recorded live and not synthesized using a computer. The music has character because of this, and Gutu sings in his baritone over full, organic-sounding instruments in a melody that mixes the lullabies of the Shewan highlands with a more modern chorus.

The music was loved by many millions. It played in taxis, events, restaurants, on TV, over the radio, all day every day for many, many days. It was a sensational piece of work and it catapulted Gutu into one of the premier Afaan Oromoo artists of his age, a crowded field as it is. The channel that publishes this seminal piece of work, Vision Entertainment, has been racking up millions of views on many other incredible music videos coming out of the burgeoning Oromo musical scene. But Gutu’s work, the philosophy behind it and the music videos that came after are quite groundbreaking in their way.

When he was 14 years old, Gutu moved to Norway where his parents lived as refugees. In the southwestern city of Bergen, Gutu started life anew. His love for music that started long before his move to Norway, took over his life quickly and he started singing at different venues where he met a slew of talented artists. In 2018 Gutu was interviewed by the BBC on his work to restart the famed Gadaa Band. Many of his performances were covers of songs by famous Oromo artists such as Ali Birra, and he played a lot of those to some distinguished audiences such as the royal family of Norway, and at some of the most popular festivals in the Scandinavian country.

But Gutu had a lot more planned in his career and in early 2021, he started working with the Tamil-Norwegian artist Mira Thiruchelvam to produce his first-ever song. He wrote the lyrics and melody of what would be one of Ethiopia’s biggest hits for 2021, produced it with the help of Mira, and had it published on Vision Entertainment and waited for what the reaction would be.

The unique way he approached Oromo music, the way he held onto traditional Oromo poetry while letting in all of that percussion and strings into the track won him accolades from all over the world. This spurred him on, for Gutu was not close to being done exploring this new style of his.

His next track, Amma Mee had a video style similar to Hawanawa directed by Gutu and Mira. But it marked a clear transition into the types of ideas Gutu would be exploring with his music. While Hawanawa was filled with happy, colorfully dressed young men and women dancing to the chorus of a man singing his heart out to the Shewan beauty, Amma Mee had a lot more symbolism hidden in every shot. The message, while with a clear romantic theme, is about dreams, specifically, the dreams of musicians and the role music plays in our lives. How some of us, especially the likes of talented musicians like Gutu, feel it is the best way to express who we are. Amma Mee is still a very happy tune and is filled with the now characteristic Gutu-Mira soundstage of percussion, strings, and saxophones.

In mid-March,  Gutu released Deemii on his own YouTube channel. Deemii is a ballad and a very powerful one at that. Shot in the beautiful lowlands of the beautiful Karrayyu Oromo people, the music video features less crowded scenes where a man (and indeed a woman) meets nature. This goes very well with the message of the song which is about the challenges one faces in life when trying to move forward.

Gutu says to go, to move forward, to cross the Awash and to climb the Tullu Dimtu. To go to Kemise and Raya for one’s love, Gutu says, is inevitable. Progress is inevitable. And if it is inevitable, we might as well align our hearts with it. Don’t look back, says Gutu, for there is no point in living where progress is not a possibility.

It is deep, but it is made even deeper by the fact that it was shot in Karrayyu, where the local Oromo people are known for their semi-pastoralism in which movement is life. When times are bad, they go forward to where there is water. In this acacia-filled environment, he juxtaposes Arsi Oromo women doing their canopy of blessings using their Siinqee to bless the one that progresses. It all becomes a story of progress told the Oromo way and Gutu tells it expertly.

Editors Note: This article was originally published in Visit Oromia Magazine under the title: Gutu Abera, Innovating in Oromo Storytelling.